Shipping industry predictions pre-COVID-19 saw major changes in shipping and delivery methods. Since the pandemic, shipping, delivery and retail supply chain needs and expectations have drastically changed; something no one could have predicted. The shipping landscape has seen an unprecedented demand due to the COVID-19 lockdowns. With this major shift, it begs the question:

In this article, we explore some far-fetched questions about deliveries over the next century… Some concepts could be realized sooner than you think.

The world has drastically changed, to say the least. When a global pandemic struck in 2020, brick-and-mortar locations in Canada and beyond were forced to close their businesses or offer curbside pick-up for the foreseeable future. As a result, non-essential businesses of all sizes saw e-commerce become mandatory in order to stay afloat — and it worked. According to Statistics Canada, retail e-commerce sales reached a record $3.9 billion in May in Canada. This is a 2.3 % increase over April, 99.3 % increase over February and a 110.8 % increase compared with May 2019. And it’s predicted that global e-commerce sales in Canada alone will reach $58.54 billion this year.

And COVID-19 also had another interesting effect on consumers — a move from the cities to suburbs, with an estimated 2.8 million people in Canada having seen their living situations altered since the COVID-19 pandemic began. In addition, more than 15.9 million U.S. residents moved during the pandemic, based on change-of-address requests, which was up 3.92% from the same time last year. What does this mean for shipping? As more people move to suburbia, the less condensed the delivery routes can be, with more drive time between stops,  and less stops delivered to by one vehicle in a day.

What will deliveries look like in the next decade and beyond?
Read our whitepaper

Rockets could deliver “instantly” across the world– and all the way to Mars!

Rockets were once used to propel spacecraft and missiles. With air travel, using rockets for delivery hasn’t hit the market. Surprisingly though, this fast delivery method was actually trialed within the shipping industry. Back in 1959, the USPS (United States Postal Service) delivered 3,000 pieces of mail by a rocket for the first time… and last time. “Rocket mail” sparked enthusiasm and some predicted its significance. But, air travel was far cheaper, and quick enough for the times. Nowadays, our world is far more connected – thanks to the internet. We have more requirements for speedy deliveries across the world. There are delivery predictions that with rockets such as Space X’s latest venture, Starship, deliveries could see a shift on Earth. Using its engineering to create courier and travel rockets, deliveries could travel over 27,000 kph. You could get anywhere around the world in 60 minutes – though most flights would take even less. For example, a flight from Los Angeles to London currently takes about 10.5 hours. With rocket travel, we’d be looking at 32 minutes.

Shipping around the world in minutes sounds very convenient. But, shipping to Mars (225 million kilometres away) doesn’t seem like a necessary venture. Why would we need to? There are no beings inhabiting Mars to receive a package. Well, there will be deliveries to Mars sooner than you may expect. The first cargo mission to Mars is set to take place in 2022, using Space X’s latest rocket, Starship. While life on Mars might be a while away for us, the rocket is going there for that purpose. The first mission includes delivering the initial infrastructure for power, mining and life support. What’s particularly special about this mission is its engineering. The rocket is built to be reusable, flying to and from Mars to deliver further cargo. In fact, its second mission will be equipped with both cargo and crew, and predicted to occur in 2024. The plan is that these first few missions will build the foundations of the first Mars base. With this rocket, it’s predicted there will be life on Mars. The engineering of a reusable rocket opens the doors for big changes, the ability to build a thriving city and eventually a self-sustaining civilization. So, in the next 100 years we might be delivering mail to and from your long-distance relatives on Mars.

Future warehouses may be fully managed by a team of robots

It’s estimated that the number of commercial robotics in warehouses will grow by 1200% by 2025. This prediction may be even closer to reality now as organizations look for ways to modify warehouses for increased safety measures in the era of physical distancing. It’s suggested that jobs in structured environments won’t need human labour for much longer. There is one example of a fully automated warehouse already in function. An e-commerce giant recently opened a 40,000 sq ft facility in China. The warehouse is operated solely by robots, sustained with no need for human labour. Tasks once performed by humans have been taken over by automation and robotics, and this trend was expected to continue long before physical distancing measures were put into place. These tasks include packing, lifting, and transporting packages to loading docks. While the mechanics of fully-automated warehouses have already been implemented, there is still room for further implementation. 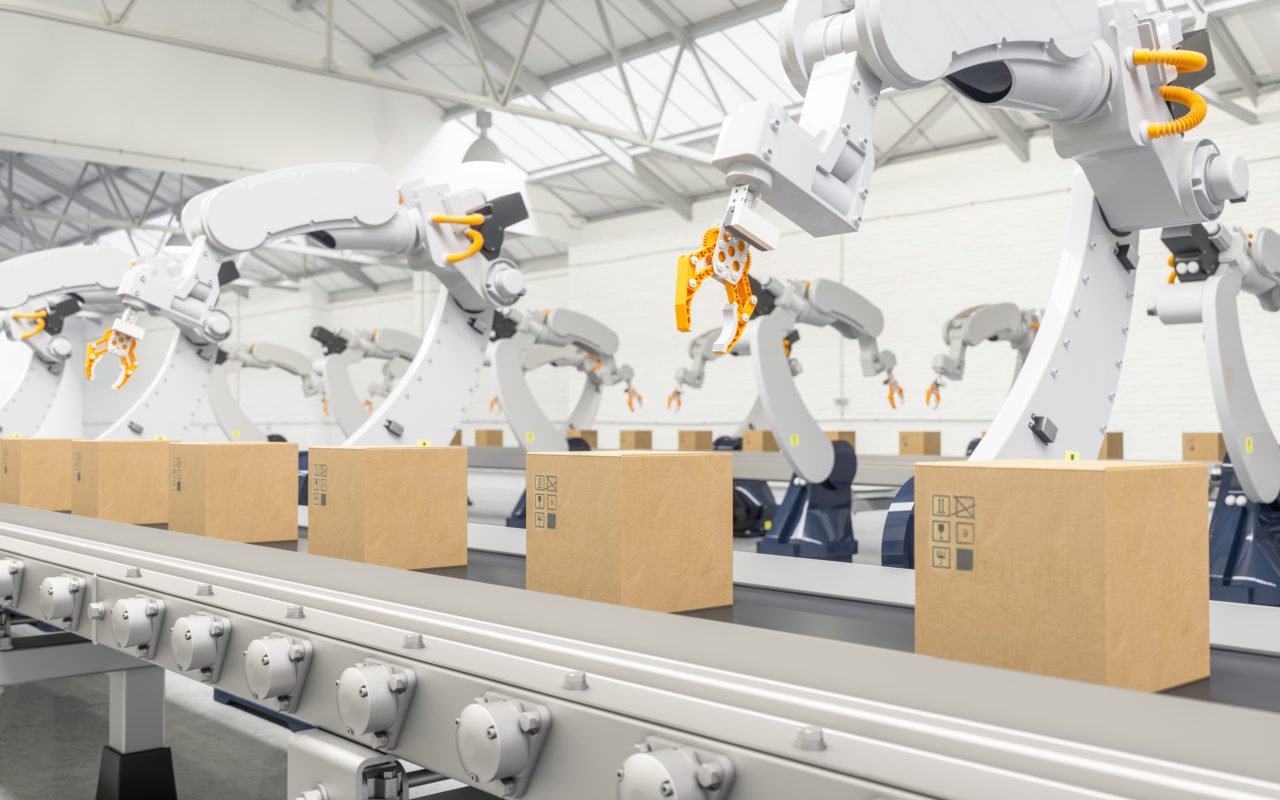 Crowdsourced deliveries could be completed by flying cars

One shipping prediction is that autonomous vehicles may diminish the need for drivers from crowdsourced delivery models. However, the predictions from the 1980s sci-fi classic, Back to the Future, could still come to life (if just a little late). Several companies have launched flying vehicle prototypes for both public transportation and deliveries. The crowdsourced transportation company, Uber, recently announced its plan to start testing its flying car demonstrations. With all things running smoothly, they predict that “Uber Air” flights could be commercially available in at least three cities by 2023. To book a flight, passengers will simply access the service from Uber app, like any other ride.

For delivery models, there’s more focus on drones, with e-commerce companies already testing their capabilities. For example, there are e-commerce giants using drone technology to deliver shopper’s orders in 30 minutes or less. However, drones miss out on a crucial element – not all packages can be properly handled by a robot. Items such as larger, valuable or sensitive cargo are still likely to need the human touch in the foreseeable future. Also, drones only have the capacity to drop off packages outside of a building whereas a human can carry a package upstairs or inside. This human touch benefits people with disabilities and those residing in apartments/condominiums. Beyond the benefits, there are still a few considerations beyond the limitations of flying cars. Air traffic control regulations and safety concerns still need to be officially addressed. And, if flying vehicles become mainstream, other materials, such as landing pads at every pickup/drop-off location, will need to be produced, too.

The 3D printing process has been around for a few decades. More recently, advanced structures such as food, body organs and entire houses can be produced. To print these items though, printers need the right materials – at a costly price tag. Predictions about personal 3D printers vary. Some experts don’t expect 3D printers to exist in homes within our lifetime. Others believe they’ll be in our homes within 10 years – and that 3D printers will be able to print anything by 2038. One advantage is an increase in sustainable business practices, as according to a study from Airbus in which they redesigned brackets for 3D printing, the company “achieved a 40% reduction in CO2 emissions over the lifecycle of the bracket and reduced the weight of the airplane by 10 kg, which also enabled a 25% reduction in material waste compared to traditional casting methods.” And another study found that 3D printing could reduce the CO2 emission intensities of industrial manufacturing by up to 5% by 2025. It’s safe to say that if (or when) 3D printing does take off, the changes to the way we receive our purchases could be changed forever.

How does it sound to transport freight in a sealed capsule inside a vacuum tube propelled by magnetic levitation? Hyperloops — which can best be described as a futuristic train — are predicted to be put into service by 2021. They’re a tube, or a capsule, that goes through a tunnel that accelerates gradually via electric propulsion. A magnet allows it to “float” along the track at speeds up to 387 kmph (240 mph), with predictions that it will be able to send cargo at a top speed of 1,000 kmph (621 mph). The environment the tube is in is carefully sealed, and there is low pressure inside the tunnel, which allows the pod to easily travel through. According to Virgin Hyperloop One CEO Rob Lloyd, a journey that would take a truck four days could be cut to 16 hours — a game-changer for time-sensitive goods such as food and medical supplies. And while initial costs are estimated to run 50% higher than truck transit, it’s thought that it would be “five times cheaper than air freight.” As for the environmental impact, some predict that by replacing most long-distance truck transport and a large fraction of airline flights, the “footprint of global transportation could perhaps be reduced by 25% or more.”

One day we may even be able to teleport our deliveries

This is by far the most futuristic question and one we can’t provide a definite answer to, because…who knows? There’s a theory it’s possible though. Everything is made up of atoms. Quantum physics and teleportation understands that items can be broken down into atoms. These atoms could be sent through a channel to the destination and are recomposed into their original form.

And it’s already been done in a similar fashion in China, where in 2017 they reported “the first quantum teleportation of independent single-photon qubits from a ground observatory to a low Earth orbit satellite – through an up-link channel – with a distance up to 1,400 km.

While this was an exciting step in a new direction, teleportation is still very much in the hands of scientists though. If teleportation is mastered, purchases will no longer need any traditional styles of transportation. They may just appear at the click of a “buy” button.

In the meantime, make the most of delivery services available now

While you’re not delivering to Mars, you do have precious cargo or shipments. If delivery is later than expected you risk losing a customer and future sales. 36% of consumers have experienced substantial shipping delays due to COVID-19. That’s why a huge priority for now and in the future is that you deliver on those promises.

With almost 70% of consumers in the U.S. and Canada stating that it’s important that a brand is sustainable or eco-friendly, it’s also going to be key to acknowledge the role that environmentally-friendly practices will play in the future. Whether that’s 3D printing that reduces deliveries, robotics that reduce a commute, drones that rely on electric technology or a hyperloop that reduces emissions related to sort and delivery, consumer behaviour is changing, and shipping companies have to change with it.

While the future is evolving, Purolator is, too. We have designed our National Super Hub with world-class automation features to meet the high standards of the Toronto Green Standards program. And who knows? In the future we could have our very own rockets and fleet of flying cars. But in the meantime, trust us with the parcels that you need to move now — we’ll be here for you no matter what the future brings.

Go to Ask an Expert: What’s Ahead for Supply Chain Management Professionals? page Ask an Expert: What’s Ahead for Supply Chain Management Professionals?